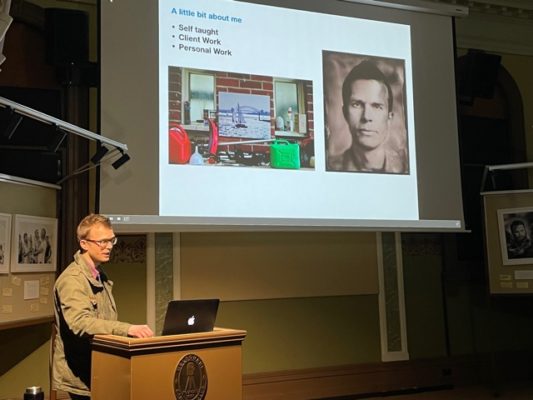 Mark presented to the analogue group in its June monthly meeting.
There were many memorable points made by Mark.

Here’s just a few.
Shooting analogue is being in the moment. Being aware and mindful of what is happening at that very moment and not being distracted by checking the image as you do with digital.
This means you are shooting for yourself. I don’t shoot to please anyone else.

Meditation helps my photography by getting me more mindful.

On his website Mark says
“Traces of beauty exist everywhere around us. The scenes depicted in this series can be found just around the corner in all of our daily lives, there is no need to travel to an exotic location to find them. Many people however may not see the beauty in the ordinary, either being too busy, caught up in their daily hustle, or have simply just not spent the time looking to appreciate the details of everyday ordinary spaces and surrounds. Sometimes all we may need is the time and space – physical and emotional – to be able to pause to experience them. “

Mistakes can be good shots. I often go back over my shots and rediscover mistakes that are actually good.

There are some of these images in Sunburnt country and in Moments.

Shooting same scene different times of day. I like to find a scene and then revisit it at different times of the day. Mark demonstrated this with a photo of a Holden car on a suburban street. He returned later that night to photograph it in street light. This example also showed how Mark works. Photographing the car at night lead to the owner coming out and threatening Mark. After an explanation of what he does they ended up with a friendly chat. Mark said he vary rarely asks permission to take street photos.

In moving from digital to film Mark said he shoots a lot fewer shots and is much more deliberate about what he shoots. This was heightened when he moved to shooting media format.

Shooting film creates low lighting challenges. Mark said and showed he is not afraid to shoot film with low shutter speeds. Accepting that low light will give limitations in sharpness.

Backgrounds. One of the most important lessons I learnt in shooting people and street photography is to choose the background first.

Documenting before things change. When asked what type of photographer he would like to be known as, Mark replied ‘a documentary photographer’

“As a documentary photographer, my aim is always to try and make the ordinary – extraordinary. To look for the personality and character in the every day life around us.”
The Italian Job